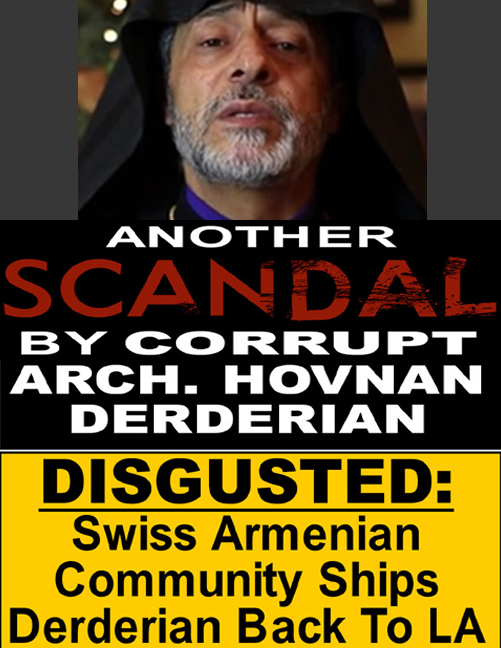 Statement by General Assembly of the members of the Armenian Apostolic Church of Switzerland:

On 8-9 April 2011, we heard through Armenian media that as of Sunday, 10 April 2011, Switzerland is considered a Diocese. We also learned through press reports that Arch. Hovnan Derderian (from Los Angeles) and Fr. Mesrop Parsamyan (from Etchmiadzin) would come to Geneva to `formalize’ the decree. In spite of not being formally informed of their visit and in the absence of an invitation from us, we met with the Arch. Derderian and Fr. Parsamyan to convey the following message representing the General Assembly of the members of the Armenian Apostolic Church of Switzerland:

1. Our position has not changed. We fully stand by our General Assembly’s virtually unanimous decision (per letter sent to His Holiness Karekin II on 25 March 2011) which: a) Rejected the formation of a Diocese in Switzerland; and b) Reaffirmed Fr. Abel Manoukian as our priest. Therefore, we cannot accept such unilateral declarations.

2. The announcement in the press had created tremendous tension, anger and frustration amongst our community. To avoid any incidents and to maintain peace in our community, the Church Council decided to close the church on Sunday, 10 April 2011

3. We represent the will of the vast majority of the Armenian Diaspora in Switzerland. This is supported by a letter sent to HH Karekin II by a majority of Armenian organizations throughout Switzerland (See attached letter with in-line text below). We wish Arch. Der-derian and Fr. Parsamyan a safe return home.