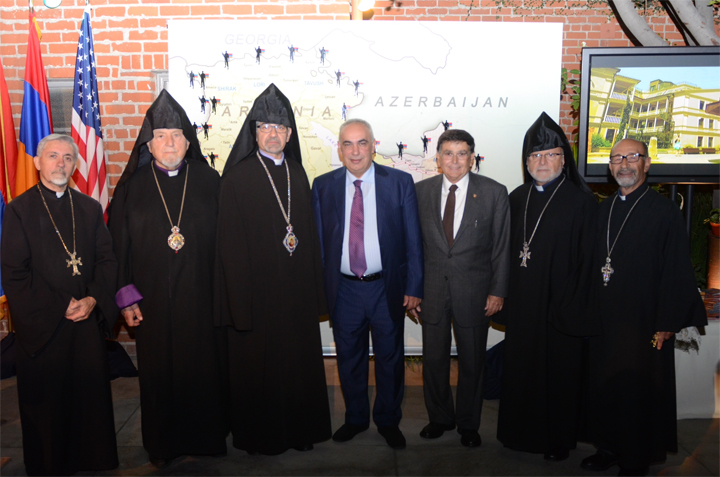 Recently Prime Minister of Armenia Nikol Pashinyan stated: “(former ruling) Republican Party leaders
are talking about traditional values saying… ‘If you are concerned about the traditional values, vote for
the Republican Party.’ … There was no greater discrediting of traditional values than during their years in
power! They say: ‘If you are concerned about the values of the Armenian Apostolic Church… .’ The
Armenian Apostolic Church has never been discredited more than during the years of rule by The
Republican Party of Armenia because Serzh Sargsyan and his team have made the church a lackey of the
ruling authorities.
PM Pashinyan asserted: “One of the most damaged institutions during their years in power is the
(Armenian Apostolic) church, because the corrupt government has done everything to make the church a
tool in the hands of the government.”
He continued: “Now we want the church to be dignified; to be decent; to have a great reputation
among the people and we will achieve it. Because we do not have any intention to use the church for our
narrow group political agenda, as others were doing. There were corrupt schemes, which, as you all
know, had sucked into corruption some of the clergy classes.”
Over the course of the past several months thousands of concerned Armenian priests and laypeople
have openly expressed their disapproval of the moral conduct of Catholicos of all Armenians Garegin II
and his inner circle which include our own Primate Arch. Hovnan Derderian of Armenian Church
Diocese of Western U.S.
On several occasions, the protesters have demonstrated in the courtyards of various churches in
Yerevan, capital of Armenia, demanding the resignation of Catholicos of all Armenians Gare-gin II and
they have marched through downtown Yerevan carrying large crosses and protest banners.
Yerevan-based reporter Zaruhi Mejlum-yan of hetq.am wrote: “As to why the demonstrators are
calling for the resignation of Garegin II and are demanding new elections to replace him, Reverend Father
Armen Melkonyan from Holland told reporters that immediate reforms are needed in the Armenian
Apostolic Church but that many clergymen are afraid they’d be defrocked if they raised their voices.”
The demonstrations which were originally organized by a group calling itself “New Armenia, New
Pontiff” seem to be turning into a worldwide movement reach ing the shores of Pacific Ocean and
Southern California’s bustling Los Angeles.
In Western United States, the movement is mushrooming into growing demands under the slogan
“New Armenia, New Pontiff — New Pontiff, New Primate for our Diocese.”
On Saturday Dec. 1, 2018, a number of Armenian Americans in Los Angeles took their protest to the
streets in a classy and peaceful way to speak out against corrupt Catholicos of All Armenians H.H.
Garegin II and Primate of Western Diocese Archbishop Hovnan Derderian.
They prepared a series of protest banners mounted on a van and they parked the van on the curbside
where parking was allowed.
One of the protest banners showed a screenshot from a video where a close ally of Garegin II,
then Primate of Canada, now Primate of Western Diocese Archbishop Hovnan Derderian seems to be
elated enough to kiss a note announcing the death of then Prime Minister Vasgen Sargsyan on October
27, 1999.
October 27, 1999, is an important date in the contemporary history of the Armenian Church
and Armenian state. Simultaneously, two major events happened on that day: the election of the
Garegin II in the Cathedral of Holy Etchmiadzin and the murders of Prime Minister V.
Sargsyan, Speaker K. Demirchyan, and other high-ranking officials of the Armenian National Assembly.

In terms of corruption, it is widely accepted that these events radically transformed political and religious
life in Armenia in a negative way. These events accelerated the deterioration of both Armenian
government and Catholicosate of All Armenians. The corruption mushroomed into various overseas
dioceses such as the ones in both Eastern U.S. and Western U.S.
The ‘presentation’ of the note took place at a time when then newly-elected Catholicos of All
Armenians H.H. Garegin II was delivering his acceptance speech at the Holy See of Etchmiadzin,
Armenia.
Reportedly, several high-ranking clergy knew of the tragic events that rocked the National Assembly
of Armenia. However, as reliable sources underline, then candidate Arch. Garegin Nersesyan urged them
to keep quiet until the election was over and his victory was secured.
What was the reason of delaying the spreading of the assassination news at the Holy See? Had many
of the electors become aware of the death of PM Sargsyan who had “pressured” them to vote in Arch.
Garegin’s favor they would have switched back to one of their own individual favorite candidate other
than Arch. Garegin and ultimately, Arch. Garegin Nersesyan could have never been ‘elected’ Catholicos
of All Armenians!
Another Los Angeles protest banner urged: “New Armenia, New Diocesan Primate!” The banners
were prepared by various activists from images originally published last week in USA Armenian Life
Magazine’s sister publication, Armenian-language Hye Kiank Armenian Weekly (The images can now be
seen on pages 1, 10 and11 of this issue of USA Armenian Life Magazine).
A number of readers contacted the editorial offices and stated that kissing of a note by a priest before
handing it to another priest or a higher spiritual leader has been interpreted by a number of clergy as
“passing
on Good News!” like the words of rejoice announcing the birth of Jesus — Jesus is born, a reason to
rejoice! In Armenian (Kristos Dzenav Yev Haydnetsav! Tsezi, Mezi Medz Avedis!)
Why would it be good news for Arch. Derderian or HH Garegin II?
According to various news reports, several weeks before the election for Catholicos of All Armenians
took place in Holy Etchmiadzin, Armenia, then Arch. Garegin Nersesyan, Primate of Araratian Diocese,
actively lobbied then Prime Minister Vasgen Sargsyan to exert pressure on various candidates to drop out
of the race and demand from electors to choose him as Catholicos of All Armenians.
Reportedly, PM Sargsyan requested that upon election, Catholicos-to-be Arch. Garegin Nersesyan
contributes a large amount funds ranging from 20 million to 36 U.S. dollars to the coffers of the
Armenian State.
Many observers explain that for Catholicos-elect Garegin II, the assassination of PM Sargsyan seemed
to be a welcome news as it would relieve him from the obligation of carrying out his promise to make
such a hefty ‘contribution’ to the Armenian state’s coffers.
As H.H. Garegin II was seemingly busy delivering his first pontifical remarks, ignored Arch.
Derderian’s initial attempts to hand him the note. The video shows after several attempts, Arch. Derderian
kissed the note which few seconds later was revealed by H.H. Garegin II to be the news announcing the
assassination of national hero and Prime Minister of Armenia Vasgen Sargsyan.
On Sat. Dec. 1, the Los Angeles protest van continued to be parked in front of the Western Diocese.
And just about 7 p.m., the Western Diocese leadership under Primate Arch. Derderian, instead of
communicating with the Los Angeles protesters in a fatherly manner about the reasons that triggered their
act of protest, called in Burbank Police Department and attempted to suck the police force into illegally
disrupting a totally legal, righteous, peaceful and legitimate act of protest. Of course to the credit of
Burbank Police officer Perry Siduglen and his boss, Burbank Police Chief Scott Lachasse, the department
issued only an ‘advisal’ (advisal noun; ad·vis·al | \Yd-Иvо-zYl\Definition of advisal: an act or instance of
giving advice).
How pathetic! Arch Derderian’s Diocese clearly attempted to undermine free speech.
Will the Derderian and his Diocese succeed in silencing the protesters?
How can he make disappear countless news accounts that speak out against corruption in Armenian
Church?
One can find literally hundreds of news-reports on corruption in Armenian Apostolic Church. They’re
on YouTube and other internet-based outlets. The news accounts bring to the forefront of Armenian-
speaking public opinion all the way from Holy See of Etchmiadzin, the Seat of HH Garegin II, to Greater
Los Angeles Area’s Burbank, the Seat of H.E. Archbishop Hovnan Derderian, Primate of Western
Diocese of Armenian Church.

Armenian Americans who are mostly English-language readers and TV viewers are left out.
Overwhelming majority of these reports are written or broadcast only in Armenian language and tiny few
are available also in English. As a result English-only speaking Armenian Americans are mostly clueless
about the church-related developments taking place in Armenia.
During past months, many English-language readers have inquired about the possibility of being
provided with news accounts also in English.
In response to growing demand by our readers, the editorial teams of the twin publications – English-
language USA Armenian Life Magazine and Armenian-language Hye Kiank Armenian Weekly have
initiated the task of reporting in English on the developments pertaining His Holiness Garegin II,
Catholicos of All Armenians and one of his longtime allies His Eminence Archbishop Hovnan Derderian,
Primate of Western Diocese. The editorial teams kindly ask volunteer assistance from writers to help
them achieve this most urgent editorial mission as the volume of these news accounts in Armenian
language that deserve to be translated into English is overwhelming. So any kind of help is highly
appreciated.