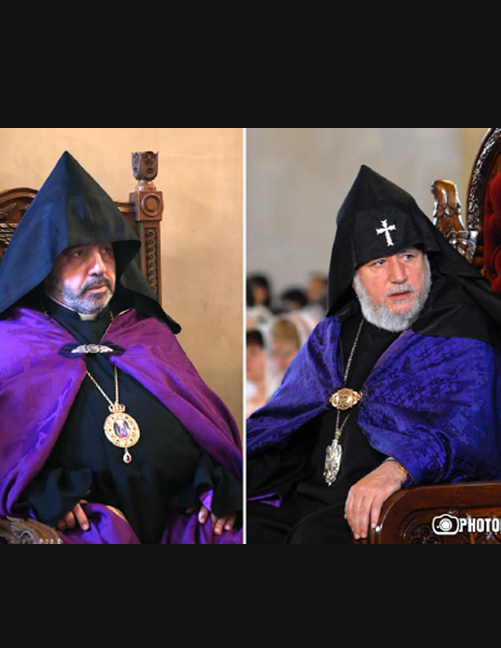 Patriarch of Jerusalem Speaks out against Karekin II

A letter penned by the Armenian Patriarch of Jerusalem Nourhan Manougian addressed to Catholicos of All Armenians Karekin II about lowering of the status of the Jerusalem Patriarchate to a Diocese has created great debate in the Armenian Church.

The Patriarch of Jerusalem stated that he published this second letter on the internet because he had not received a response to the first letter he wrote on the same subject matter. The Patriarch’s letter contains strong criticism of Karekin II.

The Jerusalem Armenian Patriarchate, on of the four autonomous seats of the Armenian Church along with the Etchmiadzin Catholicosate, the Catholicosate of the Great House of Cilicia, and the Patriarchate of Istanbul, has suffered turbulent times since the period during which the late Patriarchate Torkom Manoogian could not fulfil his duties due to illness. Archbishop Manougian was elected Jerusalem Armenian Patriarch in January 2013, and made headlines the following May when he wrote a similar letter accusing Karekin II of meddling in the internal affairs of the Jerusalem Patriarchate.

‘They only think of dollars’

Born in Aleppo, Patriarch Manougian summarizes the reason he penned his letter published on the internet on the weekend with the words, “As if the everyday problems the Armenian Church faces with other Christian communities and the state of Israel were not enough, Etchmiadzin priests, spurred on by your statement that ‘The apple never falls far from the tree’ have begun to crucify the Jerusalem Armenian Patriarchate”. The letter also contains the striking statement, “You tried to pacify the Patriarchates of Jerusalem and Istanbul before, yet failed. Come, do not attempt this again!”

The Patriarch of Jerusalem accused Karekin II of carrying out all these actions for material gains, and ended his letter with the words, “The Mother See of Holy Etchmiadzin will continue to be a source of hope and inspiration for us, but you…”

Not the first time

This is not the first time that claims have surfaced that the patriarchates of Jerusalem and Istanbul will be turned into dioceses. It is known that similar debates took place during the period when Patriarch Mesrob II was in charge of his duties. For instance, in a letter to Catholicos of All Armenians Karekin II that he wrote in the year 2000, Patriarch Mesrob II expressed his discomfort regarding this issue. Mesrob II stated that he made clear his position to Karekin II the year he assumed his position with various practices and letters, and added that a patriarch could never be considered equal to a primate.

On the other hand, heavy criticism aimed at Karekin II continues to build by the day. Catholicos of All Armenians Karekin II is criticized for his indulgence in money. His appointment of his brother as the Primate of the Diocese of Russia, his forcing of Archbishop Norvan, Primate of France, to resign, and his creation of division within the Armenian community in Nice are all seen as an outcome of his lust for money and power.

The issue had been discussed at the 5th Universal Church Representatives Meeting held at the Etchmiadzin and chaired by Catholicos Karekin II on September 28. Vazken Barin, who on behalf of the Istanbul Armenian Patriarchate travelled to Armenia along with Archbishop Aram Atesyan for the meeting, said in his statement to Agos on September 26 that the binding of the Jerusalem and Istanbul Armenian patriarchates to Etchmiadzin had been discussed at the meeting. Barin had explained that, after he reminded the meeting that the Istanbul Armenian Patriarchate, founded in 1461 following the conquest of Constantinople by Mehmed II, had existed for almost 6 centuries and opposed the changingof its status, the decision had been removed from the final declaration.