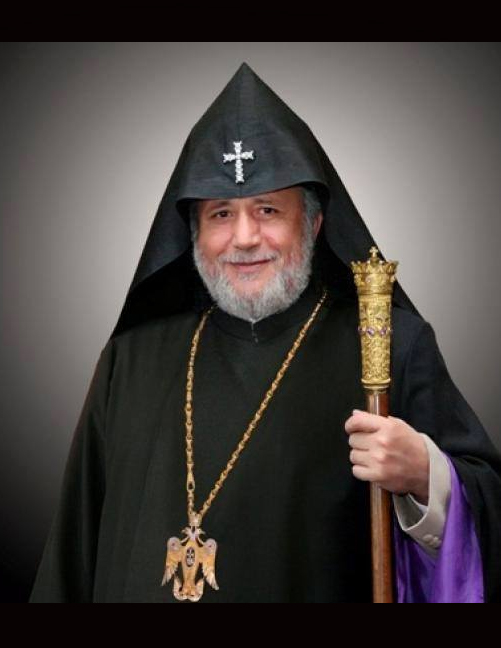 2013-08-09 –  Faced with local or national crisis most Armenians go into two modes these days: “Let’s not wash our dirty laundry in public” or “Exposure is the first step in resolving a crisis.” In the past few months a scandal—immense, terrifying and excoriating—has crashed into our national public arena. It’s no less than the management style and reputation of the Catholicos of All Armenians Karekin II. As catholicos, he is not just the spiritual leader of the Armenian Apostolic Church, but is almost as important to the Armenian Nation as the president of Armenia. A smear on the catholicos is a smear on our Nation — even on those who are members of the Cilicia See, are Catholic, Protestant… atheist.

1. Catholicos Karekin II was elected (1999) through widespread fraud, thanks to the help of former President Robert Kocharian and Armenia oligarchs. Intimidation and bribes were used to get pro-Karekin votes. The $3-million bribe came from wealthy Diaspora donors, particularly from a famed family of benefactors.

Human rights worker Ara K. Manoogian of Los Angeles has aired graphic data on how the catholicos was fraudulently elected. To summarize Manoogian’s main point, the delegations from Russia and Armenia were illegally allowed a far greater number of votes than their congregation numbers justified. Manoogian, the nephew of the late Patriarch Torkom Manoogian of Jerusalem, also says that his uncle told him about the election fraud and that he had protested to Catholicos Karekin II about the blatant chicanery but to no avail.

As well, a month prior to the election, a number of archbishops released a statement which said that Armenia authorities “at the highest level have come to a consensus in favor of one candidate and are trying to install him on the throne.” The reference was to the future Catholicos Karekin II.

2. The catholicos has fathered two children. A photo of one of his supposed offspring is on the Internet. There’s also talk that he is too intimate with a female North American donor.

3. He lacks sound knowledge of theology; knows little of the history and traditions of the Armenian Church. Despite his studies in Armenia and in Europe, he has superficial academic grounding. He even stumbles when reciting the Lord’s Prayer. There’s doubt whether he is a believer.

4. He has no spiritual grace or dignity. He is the dictatorial manager of Echmiadzin, an oligarch in royal purple soutane.

5. He has monopolized all authority as supreme judge, as head of the legislative body, as president of the Supreme Spiritual Council and as head of the College of Bishops. Transparency and accountability are foreign concepts to him.

6. He is rude, crude, common, capricious, unjust, uncouth, intemperate, incompetent, vicious, vain, venal, abusive, authoritarian, glory- and money-seeking, lacks spirituality, and is secretive….It’s not even certain whether he was born in 1951 or 1954.

7. Under his management, Holy Echmiadzin has become a cesspool of intrigue, suspicion, fear, jealousy, intimidation, and nepotism. His Stalinist-Berian style has turned Echmiadzin into a snake-pit.

8. Under his watch, senior Armenia clergymen have fathered children and lead extravagant lives. One of them—Archbishop Navasart Kjoyan, head of the Araratian Diocese—owns a Bentley, one of the most expensive cars anywhere. Kjoyan is also accused of involvement in an off-shore financial scam.

9. Homosexuality among Armenia and Diaspora clergy is another failing the catholicos hasn’t addressed.

10. Under his watch, senior Armenia clergymen have become businessmen and owners of companies. In addition to Archbishop Kjoyan, another clergyman-businessman is Bishop Abraham Mkrchyan of Vayots Dzor. He owns several mini-hydro plants.

11. As an oligarch, the catholicos is part owner of a Yerevan minibus company.

12. He has appropriated property belonging to the Church.

13. He has neglected the restoration of crumbling historical monastic buildings while spending $309,000 to purchase seven Toyotas. To avoid VAT payments, he alleged the money was donated by oligarch Samvel Karapetyan, owner of Tashir Corp. The catholicos’ “neglect” of historic church buildings has been described as “cultural genocide against Medieval Armenian churches and monasteries.”

14. His behavior and that of his Armenia clergy have driven thousands of Armenians into the arms of cults such as the Jehovah’s Witnesses and the Mormons.

15. He has defrocked at least 160 archbishops, bishops, clergymen, and deacons. Never in the 1,700-year history of the Armenian Church have so many clergymen been dismissed for non-heretical reasons. His mass defrocking has been described as “a reign of terror” and “spiritual massacre of the Armenian Apostolic Church”. As a result of his capricious defrocking binge, he was rebuked by Patriarch Mesrob II Mutafyan of Istanbul. The Patriarch pointed out to him– when a certain senior clergyman was defrocked peremptorily–that if the accusation is clear and evidential “a review board must be formed, the subject accused must be given the opportunity for self defense.” The patriarch also accused the catholicos of interfering in patriarchate affairs.

16. When he defrocked Archbishop Tiran Kyoureghyan of the New Nakhichevan Diocese, for alleged disobedience, Catholicos Karekin II installed his own brother—a priest—as primate.

17. To hide his mediocrity and limited intellectual capacity, he has driven his contemporaries from Echmiadzin, according to a group of Canadian-Armenians.

18. He didn’t condemn the recent fraudulent presidential elections. Instead, he extended his blessing at Serge Sarkissian’s inauguration.

19. His crude and immature behavior during his meeting with Catholicos Elia II of Georgia embarrassed the Armenian Church, Armenia, and Georgian Armenians. As such, he is a harmful representative of the Armenian Church and Nation.

20. He blundered, for the nth time, in his ecumenical responsibilities when he treated the Jerusalem and Istanbul Patriarchates as if these august Sees were minor diocesan entities. An irritated Patriarch Nurhan Manougian of Jerusalem announced earlier

this month that he would not attend an upcoming meeting of senior   churchmen, organized by the catholicos. He like, the patriarch in Istanbul, expressed his displeasure with the catholicos’ inexplicable tactics to precipitate the resignation of Archbishop Norvan Zakarian, the long-time and popular Primate of France.

21.While visiting Jerusalem a few years ago, the catholicos threatened senior clergymen of the Sts. James’ Brotherhood and said: “I will strip all of you of your ranks.”

22. He attempted, in Western Europe (e.g. Switzerland) to centralize the management of the various churches. The French-Armenia community publicly condemned his heavy-handed interference in the internal administrative affairs of the French diocese.

23. He supported convicted criminal clergyman (Fr. Vatche Hayrabedian) against Archbishop Zakaryan. When Hayrabedian was the pastor of the church in Nice, his congregation pleaded with the catholicos to remove the disreputable clergyman. Their pleas were ignored.

In the past 1,700 years at least 15 times Armenian catholicoi have been removed or forced to resign. The first to be deposed was Kristapor II Apahooni in 630; the last Yeprem I of Tsoragegh in 1830. We don’t know if any of the grotesque accusations leveled against Catholicos Karekin II are justified, but if even 10% of the allegations are well-founded, the Catholicos of All Armenians has no option but to resign. The longer this wound festers the worse it would be for the Church and the Nation. And those in the “bien-pensant” corner who say we should not talk (“dzamots tartsank” in Armenian) about these accusations for we would be aiding or enemies, we say the days of covering up the truth are long gone. The cat is out of the bag. How could the Church survive when these accusations hang over the head of its supreme leader? As well, keeping silent would surely help make the Church and clergy irrelevant.

Even at the best of times we can’t afford an undeserving catholicos. Considering that the Armenian Nation is groping through precarious and tumultuous times, we cannot tolerate a catholicos who has lost his moral compass and doesn’t belong on the Echmiadzin throne.  The existential challenges we face leave no room for a catholicos who, according to his accusers, behaves like a modern-day Roderigo Borgia (Pope Alexander VI).

The nation waits for Catholicos Karekin II to reply to the charges.