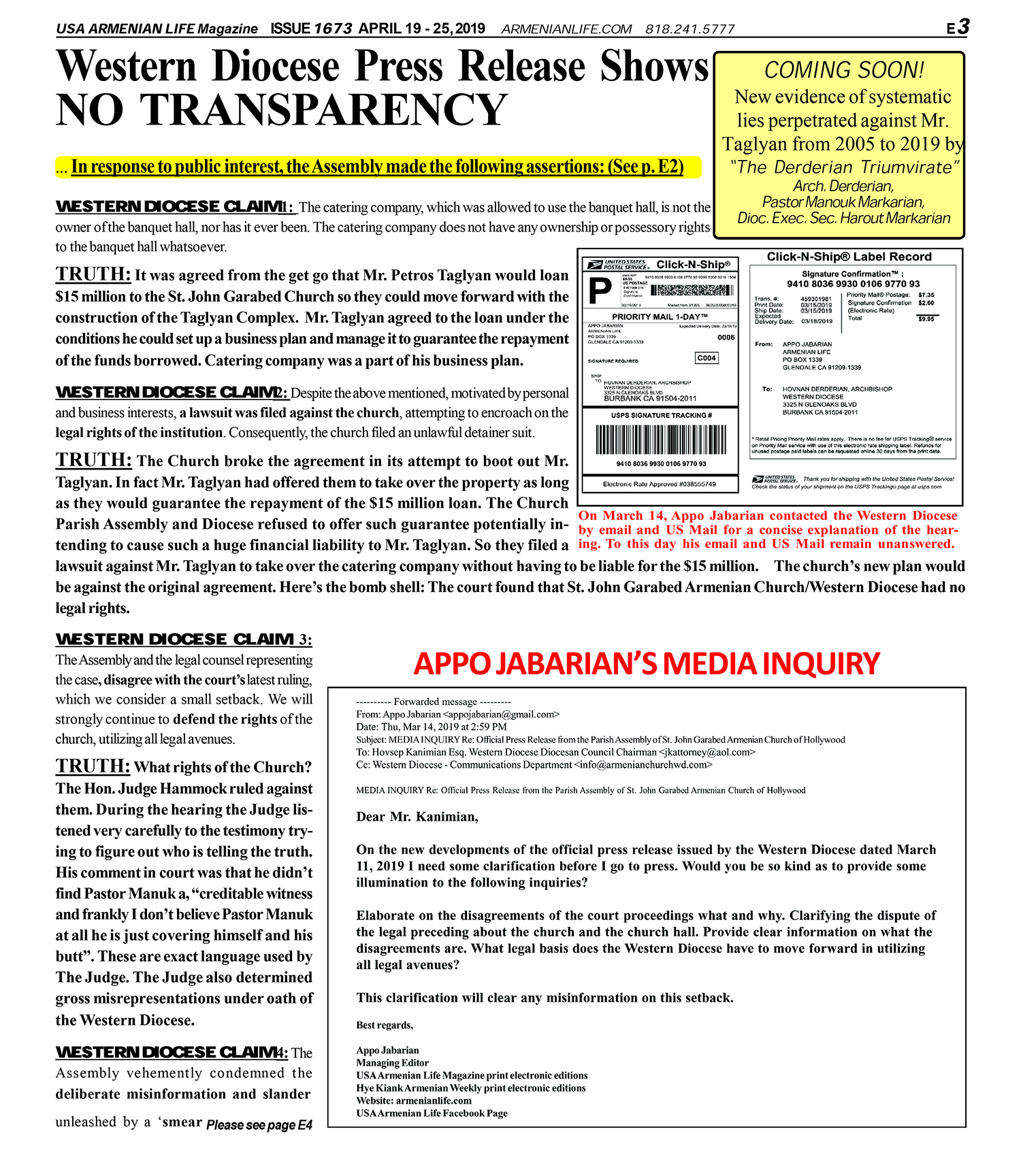 … In response to public interest, the Assembly made the following assertions: (See p. E2)

TRUTH: It was agreed from the get go that Mr. Petros Taglyan would loan $15 million to the St. John Garabed Church so they could move forward with the construction of the Taglyan Complex. Mr. Taglyan agreed to the loan under the conditions he could set up a business plan and manage it to guarantee the repayment of the funds borrowed. Catering company was a part of his business plan.

Western Diocese claim 2: Despite the above mentioned, motivated by personal and business interests, a lawsuit was filed against the church, attempting to encroach on the legal rights of the institution. Consequently, the church filed an unlawful detainer suit.

TRUTH: The Church broke the agreement in its attempt to boot out Mr. Taglyan. In fact Mr. Taglyan had offered them to take over the property as long as they would guarantee the repayment of the $15 million loan. The Church Parish Assembly and Diocese refused to offer such guarantee potentially intending to cause such a huge financial liability to Mr. Taglyan. So they filed a lawsuit against Mr. Taglyan to take over the catering company without having to be liable for the $15 million. The church’s new plan would be against the original agreement. Here’s the bomb shell: The court found that St. John Garabed Armenian Church/Western Diocese had no legal rights.

Western Diocese claim 3: The Assembly and the legal counsel representing the case, disagree with the court’s latest ruling, which we consider a small setback. We will strongly continue to defend the rights of the church, utilizing all legal avenues.

TRUTH: What rights of the Church? The Hon. Judge Hammock ruled against them. During the hearing the Judge listened very carefully to the testimony trying to figure out who is telling the truth. His comment in court was that he didn’t find Pastor Manuk a, “creditable witness and frankly I don’t believe Pastor Manuk at all he is just covering himself and his butt”. These are exact language used by The Judge. The Judge also determined gross misrepresentations under oath of the Western Diocese.
Western Diocese claim 4: The Assembly vehemently condemned the deliberate misinformation and slander unleashed by a ‘smear merchant’ and their so-called media outlets.

TRUTH: Calling investigative reporting slander and smear tactics is against my right to exercise my First Amendment Right of Freedom of Speech and Freedom of Press.

Western Diocese claim 5: The Assembly expressed its full-fledged support of the Parish Council and the Parish Priest.

TRUTH: How could the Assembly express full support to these lies? Don’t they know what is going on or is it that there is a conflict of interest and nepotism within the assembly as witnessed by the judge!

Western Diocese claim 6: In response to circulating unsubstantiated information, innuendo, gossip and obvious lies, it was promised to address the public with factual evidence via television and other media sources on the issues pertaining to the church building and the adjacent church banquet hall after the closure of legal proceedings. In conclusion, the Assembly exhorted the public not to yield to the falsified news disseminated by the hateful misinformation machine and not to give way to gossip and insults.

TRUTH: Western Diocese puts out usual press release to distort the truth and advise their parishioners not to exercise their right of Freedom of Speech and Freedom of Press. Armenians came to this country for FREEDOM from there oppressive situations. In their statement they confuse the reader by calling the “issues pertaining to the church building” when in fact it is the Tagylan Complex. As promised the public is still waiting to be addressed with factual evidence from the chairman of the Western Diocese or a designated spokesperson.

TRUTH: TRANSPARENCY: I urge the reader to judge for yourself about the transparency of the Western Diocese.

Western Diocese claim 8:Any individual or organization wishing to obtain clarifications or accurate information, may reach out to the Parish Council of St. John Garabed Armenian Church without any hesitation.

TRUTH: Note: attached email and certified letter to the Western Diocese from this writer. To date no response!

Western Diocese claim 9: The Armenian Church will not stoop to the level of petty and misguided individuals. We will remain steadfast in our mission of serving our faithful.
PARISH ASSEMBLY, ST. JOHN GARABED ARMENIAN CHURCH

TRUTH: What mission of serving our faithful! IT’S A MISLEADING STATEMENT OF MISSION! PARISH ASSEMBLY of ST. JOHN GARABED ARMENIAN CHURCH should get their facts straight and start spreading fact and not packs of lies. It is only then that they can start serving our faithful!